skip to main | skip to sidebar

This quilt was made for Charles Schall.  He served in Vietnam in the 60's/70's. He flew in a 2 person plane called the Grumann OV-1 Mohawk. It was a surveillance plane.  He was the spotter not the pilot. You can read about this plane on the following website http://en.wikipedia.org/wiki/Grumman_OV-1_Mohawk
Mr. Schall has been attending the annual reunions for the last 22 yrs and has saved his t-shirts.  He heard that I make memory quilts and asked me to do his t-shirts into a quilt.
The final quilt measured 68"x82". The t-shirts were stabilized and the sashing and backing  was a marbled chocolate brown cotton fabric.
I love doing memory quilts as they bring such good feelings and happy memories to those who receive them. 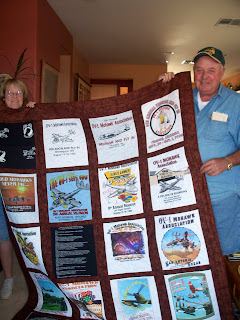 This picture is of Mr and Mrs Schall on the day they picked up their quilt from me.    Mr. Schall attends the Veterans day celebrations in Las Vegas NV every year, and marches in a  parade along with around 100 other members of this organization.
Posted by . at 3:34 PM 1 comment:

.
AZ, United States
I have lived in the desert most of my life. I love the heat, the monsoon storms and the wide open skies. I enjoy sitting on the patio with my husband and our little dog in the cool morning air. In the evening we can see millions of stars. It is a great life. As a recently retired RN, I enjoy reading medical mysteries, singing, watching movies, and of course quilting, and sharing my creative experiences with those who also enjoy my passion. I am a member of the Green Valley Quilt Guild here in my town, and also a member of the Tucson Quilt Guild. I work part time in our local quilt shop so I am able to pick up great hints/tips from the many quilters that come in to the shop "Hearts and Hands Quilts". Take the time to check out my favorite websites. My latest venture is teamed with my daughter, Michelle. We have organized Quilt Retreat at Sea- yes quilters sewing while sailing. Come on along.

Other Blogs to keep track of